A few weeks ago, I finally had a chance to play a pair of games of Malifaux with a local, Carl.  he showed me the ropes, and I have to say, I thoroughly enjoyed the game!

Today, I’m going to compare / contrast it with Warmachine, as well as share the basics of the gameplay.  I’ll also be sharing my thoughts about the game afterwards.

Malifaux is set in a Dystopian/Western/weird type world, where gremlins, zombies, nightmares and gunslingers all fight over power.  I started playing as the Guild faction, which is essentially Malifaux’s self-sanctioned police force.  Each of the Guild starter boxes specializes in fighting off one of the other factions: Neverborn (demons), Arcanists (wizards), Resurectionists (undead), or Outcasts (Nazis, goblins, doppelgangers, etc).

Each person’s army is called a “Crew”, and is made up of models worth “soul stones”.  Your crew’s “Master” (most powerful piece) is free, and you have to “hire” the rest of the crew out of the soul stone allotment for the game.  The game sizes are 15,25,35 and 50, like WM/H, with the most common being 25-35.  The games take about as long as their WM/H counterparts (or mine did since I was learning, they likely go faster when you know what you’re doing).

I started with the Sonnia Criid starter box, which is a 20ss crew, and I added a Guild Austringer for 5ss, to give me a $43 starting crew.  Not bad for buy in cost, really.  The models are a truer 30mm scale than WM/H “heroic” scale, and have just as much detail.  Wyrd is a model company first, game company second, so the models look fantastic.

The game is played on a 3×3 board, with loads of terrain.  Take your normal allotment for terrain for a WM/H game and triple or quadruple it.  Since the gun ranges are half to a third of the whole table, you need stuff to hide behind.  Each player puts down all their models, based off an initiative contest before the game, which also sets who goes first the first round.

Unlike WM/H, you activate one model, then your opponent activates a model.  You go back and forth, each activating one model until everyone’s activated their full crew.  So, having more models is nice, since you can move your weaker pieces early, forcing your opponent to move their more powerful ones before you have to.  This lets you react, as well as gang up a bit, since the rest of your models all go one after another.  The game is very, very similar to Spartan Games naval games, or Infinity in this regard.

The models also don’t have a facing, they can see 360 degrees, so really, the models are just placement tokens.  That’s a bit refreshing, since you don’t get penalized for putting down a model at the wrong angle.  It also emphasizes the need for terrain, since that’s the only way to block LOS.

Combat is completely different in Malifaux.  Attack still have a “to hit” and “to wound” section, but it’s all done with a deck of cards called the “Fate Deck”.  The deck has custom suits, and certain factions like certain suits more than others.  Often, getting a particular suit gives you a bonus of some kind (called “triggers”), and sometimes certain suits are requirements for a successful casting of a spell or ability.  Players also have a hand of 6 cards, with which they can “cheat fate” by replacing the drawn (“flipped”) cards with one from their hand.  (Hands get re-drawn after every round, so you don’t have to worry about keeping them the entire game) 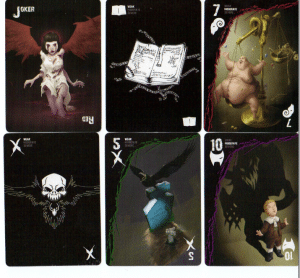 Here’s how it works.  When I declare an attack, I flip the top card in my deck over.  That card’s value gets added to my model’s offensive stat (one for spells, one for melee, as well as raw stats sometimes in a dual, much like in D&D).  That’s my attack score.  The defending model then flips the top card in their deck, adds their appropriate defensive stat and gets their defensive score.  Whichever of us is lowest gets to “cheat first”.  You can replace the drawn card with one from you hard.  However, you only get one “cheat” so pick the right one.

Early in the game, you have to debate how much you want the ability to go off, versus late game – you may need to save your good cheat cards for later, so you have to let this early gambit fail.  You are also at the mercy of the cards.  If you can’t cheat the scores higher, you’re stuck.  Once the first person has cheated, the other player gets to cheat.  Once both have cheated, which ever score is higher wins.

If the attack hits, you flip damage cards.  Depending on how strongly you won the “hit” contest, you get bonuses or taxes (for lack of a batter word) to your damage “flip”.  Most of the time you’re at a “negative” flip, which means you draw X cards (depending on how negative the flip is) and you have to pick the lowest card for damage.  So, while you’re flipping more cards, all that does is increase your odds of flipping a low damage card.  Rather than being an additive system.  While it’s possible to be at a positive flip (flip X, pick your choice), it doesn’t happen very often.

Every model has a number of wounds, so models are rarely a one-shot kill.  That combined with the constant “flip 3, pick lowest” means models tend to stick around for quite a few turns.  That’s nice because it makes the low model count of the crews work.  You almost never have “throw away” troops, and almost every faction as some way of making more.  For instance, my crew’s master has these tree little Witchling Stalkers, which are essentially cannon fodder.  They have a pistol, a sword, and they can make a little anti-magic bubble, which causes any spells cast inside a certain radius to suffer 1 negative to their casting flip.  My master has an offensive spell that when it kills, turns the dead models into one of these stalkers, at full health, and it can activate during that same turn.  Yes, I can also kill my own guys to do this, and that’s fun because the stalkers explode when they die.

In fact, I had an epic dual with one stalker and a pair of zombies.  Both zombies had been wounded by some AOE spells, and they ganged up on my Stalker.  It managed to kill one zombie, and when the other attacked my nearly dead stalker, I cheated it’s defensive score down, so I could guarantee it died.  When it did, it blew up, killing the zombie that had attacked it.  In essesnce, my 4 ss model helped take out two 6ss models, all with spectacular explosions.

Gotta have the Demotivational Poster...

The game really exercises different parts of your brain.  Since your plans don’t happen all during one turn, you have to play your opponent (the person) more, trying to bait their models into going where you want them, so you can have clear lines of fire, or so you can snatch an objective (I won’t even cover the game’s objective system which is quite extensive and very well thought-out).  Also, since your pool of influence on the randomness of the game is limited to your hand, you are almost playing poker, trying to figure out what your opponent can do, when they’re going to do it, and how you can try to get them to use their good cards early, so they don’t have them to defend against you later in the round.

I’ve really enjoyed my experiences so far, and I’ve even picked up another 7ss model, which will let me play in 35ss games.  Yes, that’s 3 ss short, but those spare points go into my Master’s ss pool, which I’ll talk about another time.

The game’s got plenty of depth, lots of interaction with your opponent, and because you’re constantly battling on one side of the combat or another, you’re always engaged and having a good time.